Today was the first Olympic distance triathlon of the season for me (.93 mile swim, 24.8 mile bike and a 10k run) – it’s a little late in the training program (I think technically it was supposed to be last week or the week before to fit ‘perfectly’, but c’est la vie!) I’ve covered the distances in training, obviously, but today was truth time. So, confession time. What did we learn? How did it go?

1) First and foremost, I must confess that I was not really excited about this race. My hubby was also supposed to do the race and he had to work so I was on my own and I was really tempted to bail on the race also. It was a 3+hour drive away and an overnight stay because there was no packet pickup this morning. In some sense of the word, it was a victory for me that I even showed up! 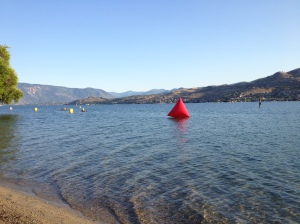 the calm before the storm…

2) The swim was pretty rough, choppy and at times almost violent, which is NOT something I remember from this race last time. I puzzled over this throughout the rest of the race – I think it may have something to do with the fact that I’ve aged up to the next age group. Last time I did the race, I was 29 – in the first wave of the Olympic distance with only the half ironman-ers in front by about 15 minutes. This year, at the ripe old age of 31, I had to wait for everyone in the half-iron group (still well ahead of us, but I did pass a few struggling stragglers towards the end of the .93 miles) AND I had all of my wave PLUS the first wave to fight through. The water was choppy. People were all over the place and there was seemingly no end to watching out for feet, elbows and fists. This is not something that I snobby ex-pool-only swimmer likes to see. Whether being in a different age group made the different or not, I added a couple – 2 or 3- minutes to my swim time from 2010, which I was bummed about because, ironically, I’ve been swimming a heck of a lot more this year than back then. Confession: I was/am(?) a little concerned that I’ve been swimming and somehow gotten s-l-o-w-e-r.

(trying to) swim in the crowd

3) As you may have gathered from #2, I’m a front of the middle pack or maybe back to middle of of the front pack swimmer, depending on the crowd. What’s the confession here? It’s this: the benefit of being good in the water is not really not a benefit at all – you get to hop on your bike early and be passed by people who say well-intentioned but ultimately funny and demoralizing things like “Good swim…” and leave the “too bad you’re not a better biker” hanging in the air. I know, I think so too. I even heard a guy in the water before the start talking about how he never worked on his swim because he just didn’t see it as an advantage. Now now. You may blow by me in a few minutes, but I’ll put money on the fact that I’m probably less frazzled and winded from the first leg. But I digress.

4) Ok, this is maybe the confession that concerns me the most with a 70.3 looming: Sadly, my climbers are not what they should be on the bike. Biking is definitely my weakest link and while I’m slowlybecoming a better biker with time and practice, I find I don’t push myself as hard as I do when I’m running or swimming. I think it has to do with the fact that I associate biking with casual rides around the neighborhood as a kid. You know, relaxed. Carefree. Not grimacing, sweating, legs and lungs burning kind of biking. Nothing quite like race day to make you put the pedal to the metal, really push yourself to try to compete with the fools that are flying past you like you’re standing still (even though your bike computer insists you’re moving at what you feel is a respectable clip). Fortunately for me, today’s course was rolly, but not hilly. Twenty-five miles of really pushing it and I’d be lying if I didn’t say I was a little concerned about how well I’d hold up and how much gas I’d have when I hit the run. Plus, my knees have been hurting on higher cadence rides and I definitely noticed it today when I climbed off. But fortunately once I was on the ground it went away. (Note to self – probably oughta get that straightened out, wouldn’t you say?)

5) I forced myself to eat and fuel all day. Forced is the operative word here. I hate eating in the morning, but I had a banana and a bar and a bunch of water before I swam, three gels on the bike and one on the run. Lots and lots and lots of water. Other than the gross queasy feeling I had before the swim (which could definitely be attributed to the fact that my stomach deemed it too early to be accepting food and also to the fact that I was ready to just get this thing going already), and a brief moment around mile 18 on the bike where my stomach reminded me how hard it is to digest folded over bike handlebars (I spent a few minutes sitting upright), I felt good. Hm. No confession here, I suppose.

6) Last time I did this race, I thought I was going to die of heat exhaustion. I’m not gonna lie – this was really a big concern of mine for this year as well. To combat this, even though I really didn’t want to, I carried a water bottle with me and every water stop (there were 4 or 5, I believe), a cup of water went on my head and neck and I drank or filled my bottle with the other. In between stops, I made sure I was keeping my head cool and drinking a lot. I felt a lot better about the run this year than I did last time, that’s for sure. And I think I was able to shave a few seconds off of my last run time for the course as well.

7) Lastly, triathlons continually remind me to be humble. I try to be supportive, talk it up on the race course and encourage people. But in every race there is someone, maybe a few someones who (in a moment of judgy-ness or jealousy or poor sportsmanship or whatever you want to call it) “have no business being in front of me”. I’m not proud of it. Yet, there they are. And they’re there, in front of you for a reason. Maybe they’ve put in more work. Maybe they’re more determined because they’ve seen more adversity and overcome more so they’re stronger. Maybe this is their life’s dream and for you its simply a training run. Maybe they are there to motivate you to stick with it or kick it in at the end. Still others may be there to remind you to be gracious and thankful for the skills and abilities you have. Or maybe they’re there to remind you to be inspired by the people around you.

Today, around mile 5, maybe closer to 5 1/2, a gentleman who I knew had been with me for a while finally picked up his pace, ran up beside me and said “Hello, how are you doing?” I said “I”m great, beautiful day” or something to that extent. He smiled, commented on what a nice pace I have (he should know, he’d been hanging out in it for a while), and then sped off, beating me to the finish line by more than a handful of seconds. And as he ran off, I noticed the numbers on his calf read: 6-8. Man. Sixty-eight years old and still rockin’. I just smiled and shook my head, I picked up my pace but I wasn’t going to catch him. Mr. 68, you are my hero for the day. You reminded me to smile and be happy with the day and to be inspired by the journey that others are on. I can only hope that 37 years from now I’m still able to do this with a smile on my face.

One thought on “confessions from an olympic tri…”